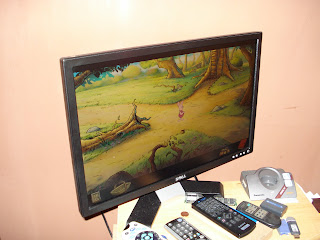 Rob bought Oliver some computer games (his first ones) as he likes to sit on Rob's lap and watch Rob play his game (Lord of the Rings).

It is called "Piglet's BIG Game" and Oliver loves it. Rob showed him how to use the mouse and that the arrow needed to be white before he could click on the item......he picked that up in no time !! Our mouse is a little too big for his hand so we are going to look for a smaller one just for Oliver to use.

Ok, so the game is really good for kids. You travel with Piglet through the Hundred Acre Wood collecting items Rabbit needs to make his Very Large Soup, visiting all the other characters along the way as they each have something to add to the soup. 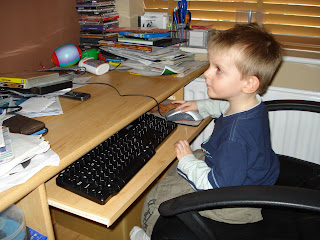 Here he is concentrating !! LOL Isn't he cute !!

Rob bought 3 games in total but the other ones wouldn't load on the pc so we are trying to sort those out.