So, after doing some "business" jobs yesterday (newsletter, placing order's) and cleaning the house, I was planning on sitting down and stamping. We had eaten our dinner and Oliver was in bed, but not asleep. You usually hear him wondering about his room and after a few 'get into bed' from us, he lays on his bed talking to his soft toys.

So last night was no different than any other. I heard something he was playing with fall on the floor so I went up to see what it was. To my absolute shock and horror, I found Oliver sitting on the window ledge!!! 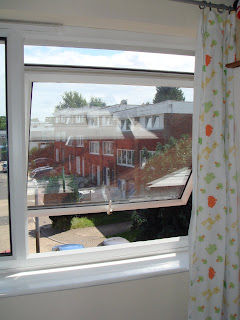 This window has a mind of it's own. You can only open it 1-2" otherwise it just opens right up (like the photo). Oliver's room gets quite warm so we leave the window open very slightly to cool it off.

This intelligent boy of ours somehow climbed up to the ledge and was sitting on his knees when I got there. He was retreating backwards behind the curtain (probably because he knew he was in trouble). All I could think of was - "don't frighten him or he might fall out the window". I ran into his room and grabbed him, hugged him and sat on his bed. I had to sit down or otherwise I would have fallen down as my legs were shaking. My heart was pounding! By this time I had yelled out and Rob came running up the stairs to see what was going on. I told him where I found Oliver sitting. I was still hugging Oliver (I didn't want to let go) and Rob was telling him how dangerous that was and what would have happened if he had fallen out (below was concrete!). We told him there would be no more Oliver! Naturally, Oliver then got upset and was crying hysterically. I kept holding him until he settled down.

For the rest of the night, I had images in my head of him falling out the window and I just couldn't shake them. Needless to say, I wasn't going to stamp! Even though we locked the window shut, I had to go and check on him constantly. I even laid down with him (he was still awake) and 5 minutes later, he was sound asleep. I didn't have any dreams about it (thank goodness).