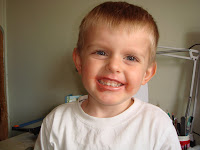 So here is Oliver today after finding my lipstick (somewhere) and putting it on like it was his chapstick !! LOL Isn't he beautiful ?!?!

Give him a few years and if he did this again, he won't want his photo taken - used as evidence against him at his 21st !! HA HA HA. Rob wanted to put him in a tutu, just for that reason! Cruel, but funny. 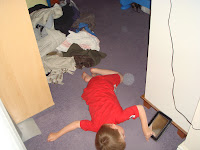 He is supposed to be in bed, but found a mirror and was talking to himself. That pile of clothes at his feet - I DID NOT PUT THEM THERE!!!!!! Guess what I will be folding up tomorrow.

As I like to post the date we do things and not as I go along, check back for older photos of Oliver I just haven't got around to posting (you will need to scroll back down to see them as these two are today's picture's).