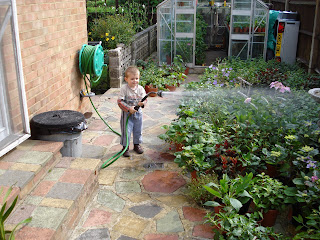 On Sunday (Father's Day in the UK) while I was on the phone to my parents, Rob took Oliver around to his parents house (they are on holiday) to water the plants that Dennis has been growing for the carnival which happens every 2 years. The last carnival, Oliver was part of a group (his Thursday play group) and they went as the 101 Dalmations.

It was quite a long walk around and as Oliver was only very young, he went around in Grandma's buggy. 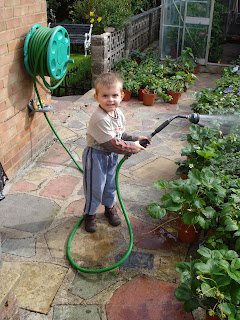 Anyway, back to watering the plants! Apparently right after this photo was taken, Oliver turned the hose on Rob and soaked him!! ROFLOL (rolling on the floor, laughing out loud!).
As you can probably tell too, daddy dressed Oliver in whatever clothes were the nearest.