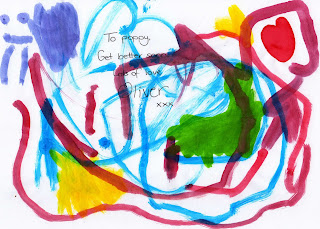 Dad has had to go back into hospital again as he has had some more 'turns' and his Dr wants to put more stents in to stop these 'turns' from happening again and causing a major heart attack. I didn't know until afterwards, but he had 6 stents put in and even had a bit of a turn while on the table!!
Oliver wanted to do some painting so I said why not make one for Poppy. This is what he came up with. The eyes and mouth in the top right corner is an octopus!! LOL.

Hope your Dad is Ok now, and recovering well!
xx