Oliver at work and play ! 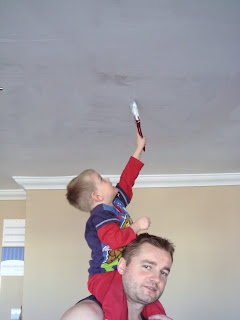 You know how some people have a feature wall (we do) well we also had a feature ceiling !! LOL. Our bathroom had a very slow leak (which we didn't know about) until one day I looked up and the ceiling in our lounge room to discover a crack. We didn't think much of it but the crack got bigger and bigger. Anyway, our neighbour is a plasterer so he came and fixed it for us. We also thought we fixed the leak - NOT !!!! The new plaster was getting wet so we didn't bother painting the ceiling until we knew for sure the problem was fixed. To cut the story short, the IDIOT!!! who put the shower unit in and tiled (can you tell I am mad?) didn't adhere the tiles to plaster but to wood (the space had previously been where the boiler sat). Therefore the grouting was coming loose and the water was leaking through the gaps. I did mention the grouting problem to Rob and his Dad but was knocked down in flames - what would I know !!! Well guess what ???? IT WAS THE GROUTING that was causing the leak. After Dennis (rob's dad) re-tiled the bottom half of the shower and re-grouted - the leak was NO MORE. Yay. So today Rob decided to finally paint the ceiling white again. Oliver wanted to have a go so here he is on Rob's shoulder's - he only just reached. 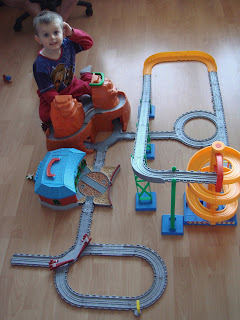 The boys got the Thomas The Tank Engine set out this morning to play with. Rob put it together for Oliver. The two bigger pieces Oliver got for Christmas. 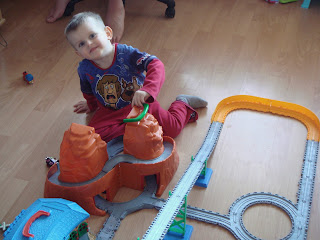 The one that Oliver is holding onto is called the Mining Co. and Christmas day, this is all he played with. He loves it. It makes noises when you push the trains around in certain spots.