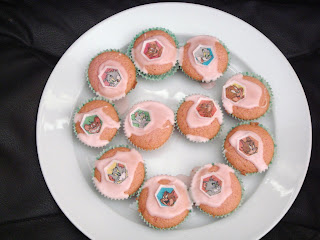 It was baking day today! Oliver and I made some some chocolate cup cakes at the beginning of the week (forgot to photograph them) so it was daddy's turn to cook.

As Oliver loves to watch Tom & Jerry, we thought he would like to bake them too! LOL They are strawberry flavoured with, you guessed it - strawberry icing! Talk about OD'ing on strawberry. 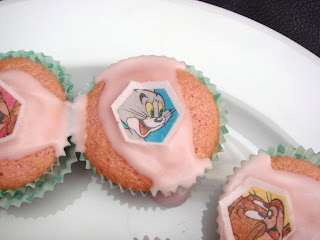 Here is Tom up close. It is rice paper with the pictures printed on it. 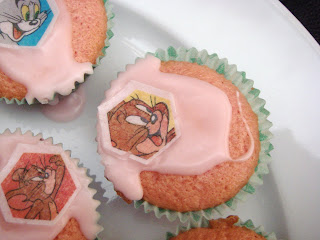 Here is Jerry! Rob got a bit carried away with the icing and instead of adding tsp of water, he added Tbsp so luckily I had some icing sugar in the cupboard and added that to thicken. It is still too runny (as you can see by how the icing went on) but Oliver didn't care! 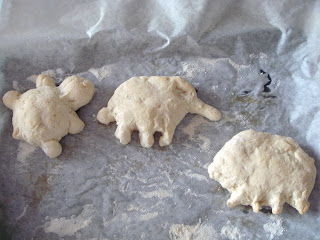 This is also what they cooked. They are cheesy bread animals. L-R: turtle, dinosaur & pig. Apparently there was also a car and a smiley face. They ate the smiley face (because they could!) but the car was rubbish so Rob ate that before I could take a photo.