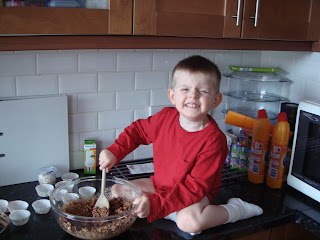 I have had the ingredients for chocolate crackles for weeks and just haven't been able to make them.

It was going to involve Oliver as a treat for him. He loves eating chocolate and Rice Bubbles for breakfast so I know he will like the two of them together.

Here he is mixing the two ingredients together. After a couple of minutes, he had had enough of mixing !! 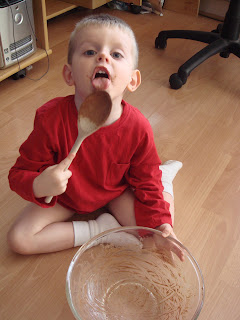 I thin he liked licking the bowl, well actually the spoon and I am surprised he didn't lick the bowl. 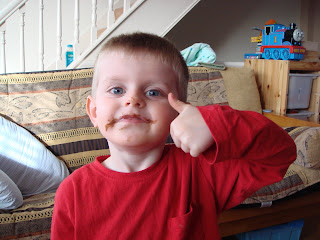 I saw the chocolate all over his face and just had to take a photo. I'm sure this kid had ants in his pants as he just cannot stank or sit still. BTW - I didn't teach him or even tell him to do that with his thumb. That was his own idea !! LOL

He even has chocolate on his nose !