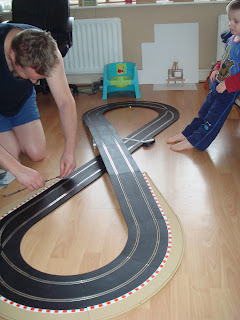 I tried to post this on Sunday but an error kept coming up so I thought I'd wait a couple of days and try again.

So here we are. Oliver is looking on while Rob is putting the track together. Rob bought this track (for Oliver!!) when I was pregnant and before we even knew that we were having a boy !! He used to have a set when he was young so I think he is re-living his childhood. LOL He had to test it out as soon as we bought it and then our friend's bought a set so with the two sets combined it made for a mighty track which the two boys (um, men) had a ball with.

Now that Oliver is old enough, this is the first time that the two of them have played together and Oliver got the hang of it really quickly. 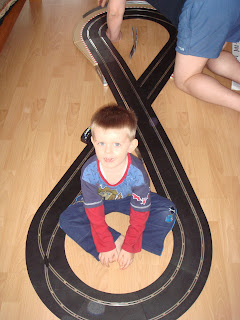 Oliver wanted to pose for the camera so while Rob was finishing off putting the accessories on the track, Oliver sat in the middle - "strike a pose". 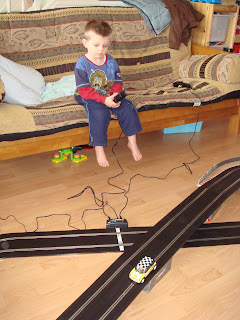 Here is Oliver in action. He loves his 'yellow' BMW Mini. There is a red Mini too but he only wants to use the yellow one.

He actually has the control upside down with the lever on top and he is using his thumb to make the car go.

He gets all excited and starts shouting 'Look at my car go'.

I think we have a winner here!! LOL

did Oliver really get a chance to use the car? or did Rob hog it?? LOL