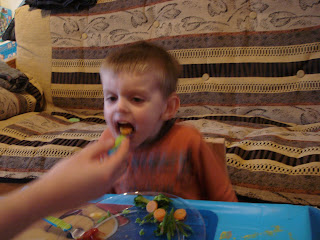 OMG!!! Olive is eating vegetables. Yes, we have decided to take drastic actions - not really but we are taking a different approach to get Oliver to eat like a 3 year old should eat.

So far so good. Even though Rob is putting the food in his mouth, he is eating it and not saying 'no'.

We spoke to our health visitor about his eating as he is not getting enough vitamins and goodness in what he is eating. She suggested the different approach and that she would like to weigh him to see where he is on the scale of things. If he was underweight, she would refer us to a nutritionist. He is not under-weight by any means so I am not concerned there. But it would be nice to go out and order something from the menu for Oliver instead of hoping he might eat chips or garlic bread. We went our for a curry a few weeks back and Oliver loved eating poppadoms, but that is all he ate. He refused to try anything and I think we gave in too easily. We have always not given him anything else to eat if he doesn't eat his food but there was always milk for him to fill up on !! Now he is not having milk at night but he is filling up on flavoured milk during the day !! Oh, what to do !! LOL He has been to bed 3 nights without eating his dinner so he has been very hungry when he wakes up in the morning. After 3 days, the picture above is what happened. Little steps.