After Oliver's swimming lessons this morning we went grocery shopping and told Oliver if he was good today he could have some ice cream as a treat. We don't have ice cream very often which is good for me while I am on my diet but every now and then we treat ourselves. I rang my parents (in Australia) and gave Oliver the telephone and he was talking to Poppy while we were putting the shopping away. He then had some lunch and he was allowed to have his ice cream. By this time I was talking to mum and Oliver was trying to tell her what he was eating. 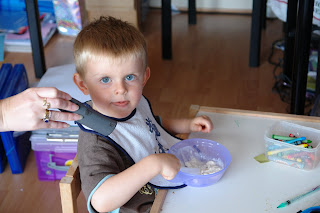 As you can see from the photo, I had to put the phone on speaker and hold it near his mouth so he could tell Nanny what was in his ice cream (smarties) as he wasn't stopping for anything or anyone.

I don't stop eating ice creamto talk to anyone either! LOL
Love the cards you have been making, and I really like that chocolate fountain