We headed off this morning to Whipsnade Zoo in Bedfordshire but ended up at Woburn Safari Park due to the roadworks on the M1. We thought we had missed the exit for Whipsnade but further on was another sign for a park so we headed for that one. This particular park you drive around like on a safari. It is a bank holiday in England and a lot of other people had the same idea so the park was very busy. The worst part was getting to see the Lions - who were just lying about off the side of the road. If you opened your car window and put your arm out, you could almost touch them (health warning: you may loose your arm if you do this!!). It also took us at least 40+ minutes to get past the lions because of the traffic jam!!! 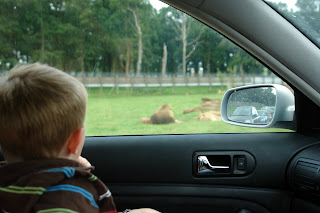 Then we came up against the monkeys. Oliver loved these as they jump on your car and if you are not careful they will run off with your car ariel or other bits. We had 2 jump on our car and as we have a sun roof, we could see one sitting on the roof. 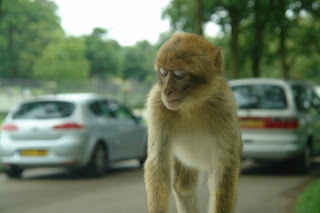 After driving around safari style you then head to the 'foot safari' - walk about to see the animals in their enclosures. There was a section called 'Australian Walkabout' in which they had wallabies and emu's and you could feed and touch the wallabies so here is a photo of Oliver and his new friend 'Wally'. 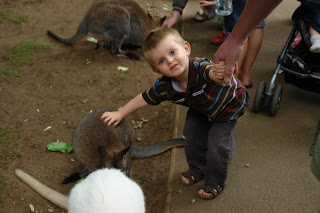 Lovingly Created by Kylie Swain @ 3:37 am

Love the wallaby photo....check or blog to show Oliver the ones of the boys with our Aussie animals!