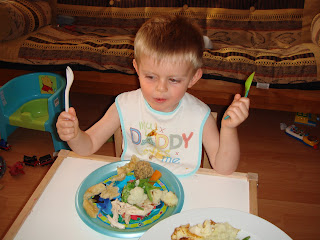 I know, you are probably wondering what is so fascinating about a boy eating his roast dinner - well for those of you who know Oliver will know that he is the worst eater in the world. The only big boy food I can get him to eat are: McDonald's cheese burger meal, Chinese fried rice and tomato soup. Of course he will gladly eat chocolate and chocolate biscuits, ice cream and so on but not what Rob and I eat. I was watching the 'Super Nanny' on TV the other night and one of the problems she was facing was 3 year old twins eating pureed food !!! Now Oliver's eating is not that bad but it could be a lot better. Anyway, we decided to take the Super Nanny's advice. 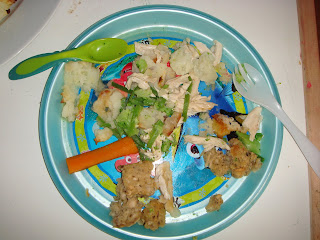 We sat at Oliver's little table with him so he could watch us eat and we could encourage him. He didn't refuse to eat which was a good sign. The first thing he did eat was his Yorkshire Puddings - he likes them. We snuck some beans in one of his mouthful's and he ate it then we tried some chicken but he cottoned on to it and spat it back out. There probably doesn't seem too much difference in the 2 photos but he had a go at it. He did actually eat a couple more mouthful's after I took the photo. We gave him big cuddles and kisses for his effort. Let's see what happens tomorrow night.
Lovingly Created by Kylie Swain @ 4:38 am