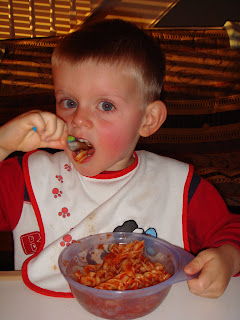 Yes, victory is on the horizon!! It took us 1 hour to get Oliver to eat his dinner tonight - Pasta with a tomato and basil sauce. He absolutely refused to eat one spoonful tonight so he was told he wouldn't be getting his cookie (we have had this cookie for 3 days as a treat for eating his dinner). We put his toys away and he could play with them if he ate, but no luck there either. He then went to be without his bottle or a story!! I was starting to cook our dinner and Oliver was crying in his cot. After about 5 minutes I went up to him and we spoke and he was willing to try some dinner. By this time his dinner had gone cold so a quick zap in the microwave and it was just warm. I put ONE spiral piece of pasta on his fork and he ate it !!!!!!!! OMG !!!! I sat him down and he wanted to eat some more. We praised him and this is Oliver eating his cookie.

I think he is starting to realise that we won't be backing down so he might as well eat his food - 'cause you never know, he might actually like it.
Lovingly Created by Kylie Swain @ 4:37 am