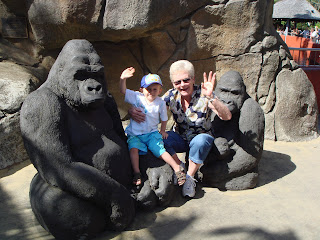 This is our day out at Taronga Zoo in Sydney. It was a lovely warm day with the sun shinning.

As you can see we saw the Gorillas and this family were kind enough to have their photo taken with Nanny and Oliver !!! LOL.

When we got around to the lion's we were just in time to see them being fed. One was pacing back and forth as he knew what was coming and then you just had to watch him tear into his food as they were right in front of the glass window. The next window along were the tigers and they were already eating their food when we got there. 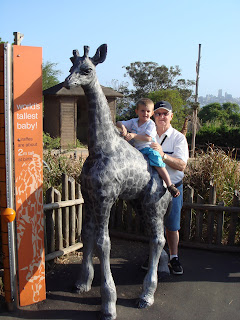 Oliver loves Giraffes so he had to climb on this baby giraffe and have his photo taken. There were a family of Chinese people who Oliver kept saying hello to so they wanted to take a photo of him as well. It was really quite funny. 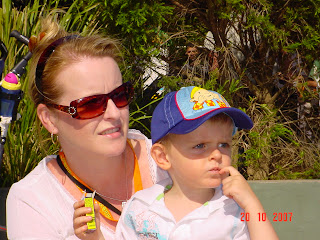 This photo of Oliver and myself was taken as we were sitting down to watch the bird show. Some of the birds fly only cm above your head as they parade around. One flew right over Oliver's head.
Lovingly Created by Kylie Swain @ 6:25 am