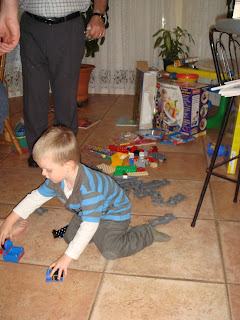 Hoorraahhhh, we are in Sydney. We had an interesting flight with Oliver. I'm not in a hurry to repeat it but he did pretty well considering we flew direct with just an hour and a half stop over. He had a run around in Hong Kong airport so he used up some of his energy. He fell asleep about an hour before we landed in Sydney and we were trying to wake him up on touch down - his eyes would open for a second or two then they slowly closed. It was funny.
When we got to my parents house, Oliver had a ball - he had so many toys to play with. He has all sorts of toys including a three wheeler trike.
Lovingly Created by Kylie Swain @ 7:14 am