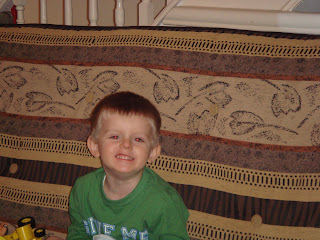 I took this photo of a cheesy Oliver last night. I tried to take a photo without him knowing but he caught me and he now had to say 'cheese' with a big grin when he spots the camera !!!

This is Oliver's first 1/2 day at nursery today. He was supposed to start last week, but with me being too ill to drive and my in-laws looking after him, he didn't go.

He still goes all day on a Friday but I added another 1/2 day to see how he goes. It didn't start out too well this morning - he didn't want to go at all. I think he thought he was going to see grandma and grandad. He cried when I parked the car, then he was ok once we were inside the building. He got to his old room (the one he had just left) and didn't want to go any further and he most certainly did not want to go through the double doors to his new room !! He started crying again. I stayed with him for about 5 minutes then one of the girls came over and took Oliver from me (which he did not like one bit !) and was giving him a cuddle. I had to quickly leave the room so he could settle down. I don't know why he was acting like this except to say he knows he see's his grand parents first then he goes to nursery - not the other way around. If the girls can distract him, he will settle quite quickly and they were going to read a story when I left.