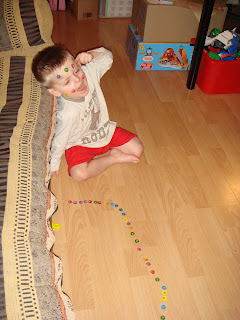 Follow the trail and you will find Oliver !!! Oh look, there he is. LOL I bought Oliver a Bob The Builder magazine while grocery shopping and there were stickers inside - this is what he did with them. Before he stuck them on the floor, he stuck them on his face and legs.

It is 10:30pm and due to Oliver sleeping late this afternoon, he didn't want to go to sleep straight away when we put him to bed. He was calling out to me and also talking to himself. However, I have just checked on him as the movie on tv is finished and I was going to log off and go to bed. I just had to tell you what Oliver had done !!!
In my earlier post, Oliver had changed his pj top. Well, during this afternoon's nap, he pulled out his pj shorts from the drawer and put them on although when Rob picked him up, it looked like he had reached over to his underpants drawer and put them on over his nappy. It was only after I took a closer look that I realised they were his shorts. He had them on inside out and back to front !!! LOL 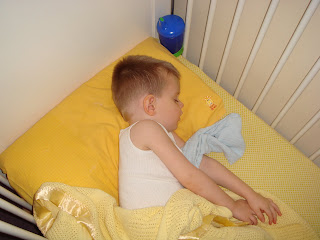 Tonight, he has taken his pj top off and put it in the drawer (the right one mind you !!). We have a stereo set up in his room and we put on a CD with classical music for him to go to sleep. There are two parts to make the stereo work and Oliver turned off the bottom part which connects to the speakers so the CD was on but with no sound !!!
I wonder what other antics this kid is going to come up with while in his room ???
K.
Lovingly Created by Kylie Swain @ 9:41 am