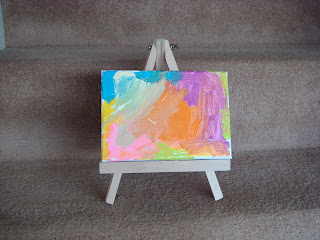 I bought this easel yesterday while out craft shopping with my friend Sally. While wondering around Hobby Craft, I came across this easel and canvas (sold together). I wanted the easel to display my cards when I take photos of them and thought, well Oliver can paint the canvas - he will love that.

And he did love it !!! After painting the canvas, he painted on copy paper until he got bored and wanting to play with his toys.

Well, he finally did it tonight. He had a really good sleep this afternoon (so did I), so he stayed up a little longer tonight but only by 30 minutes. Rob took him up stairs to read him a story then they play hide and seek which is quite funny because Oliver usually stands in his room with his hands over his eyes. Anyway, back to tonight's story.....he was in his bed happily talking to himself then shouted out to me which I couldn't quite hear but it was something to do with his foot. I went up stairs and he had taken his nappy of again but had an little accident of the poop variety. Nothing major but he didn't like it being on his foot (I think he stood in it). He was spoken to about taking his nappy off (only the second time he has done this), cleaned up, bed clothes changed and put back to bed. You have to laugh at these things.