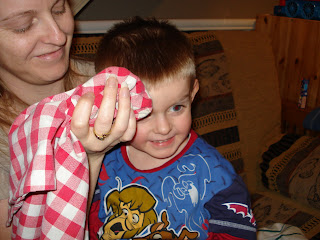 Oliver and I were watching 'Chicken Little' on DVD this afternoon and at the end they sing so we were dancing around the lounge room. Oliver was going around in a circle and slipped - straight into the frame of our couch !! Ouch !! I heard the thud and turned around to see Oliver up close and personal with the couch. It looked like he hit his shoulder and then the tears and crying started. 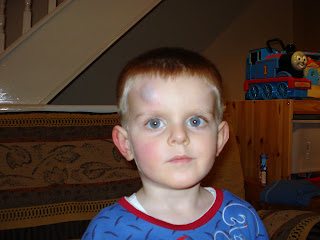 It took me 2 seconds to get to him and when I looked at him, I could already see this EGG !! I then realised he hit his head and not his shoulder. Poor thing !! I grabbed some ice and he didn't mind me holding it up to his bump. I gave him some nurofen in case his heads starts to hurt.

Rob is home from work now and the two of them are playing so his EGG doesn't seem to bother him. Phew !!